We've known college students enjoy using protein models as tools for STEM Education and learn equally well from both computer-aided molecular visualization software as they do physical models. Could the same apply to grade-school children? 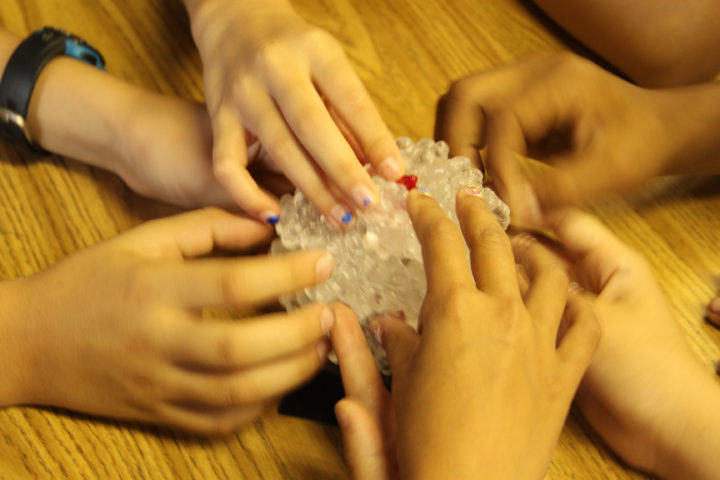 Recently, we got the chance to put some of these questions to a test and present our Hemoglobin models to Brooklyn PS321’s 5th Grade science class. Beth Handman, Vice Principal at PS321 put us in touch with Science Teacher, Patricia Nock.  Patty worked with me to develop a lesson plan for the kids which would introduce a number of basic concepts related to proteins models.  Right around the 5th grade, kids start learning about the Scientific Method and the importance of using Scientific Models to understand test results.  Our thought was that this could be a great age to introduce to children a new type of scientific model based on protein data, especially given their familiarity with plastic toys.

It was important to present the children with proteins through a variety of visual formats in order to determine if and how successful our protein models are compared to existing methodologies of communicating protein-specific information.  Existing formats include Molecular visualization software (3D protein viewers), which allows a user to orient and explore protein data on the computer.  Illustrations and 3D animations which convey larger narrative information, and finally our own handheld models.  All interpretations of the same data, yet 3 distinct outlets for visualization.  In the lecture, we introduced the kids to 4 different proteins: Ferritin, Antibody, Ribosome, and Hemoglobin.  We presented information about each protein using a combination of 3D animation, illustration, and molecular visualization software.

To isolate how effective our models is, we divided the four classes into three different groups, presenting each with information about the first three proteins identically, while Hemoglobin slightly differently.  Group A was just shown Hemoglobin using illustration and a computer-aided 3D viewer alone.  Group B was shown Hemoglobin with illustration and physical protein model alone.  Finally, Group C was shown all options:  illustration, 3D protein viewer, and physical protein model.   At the completion of the lecture, we asked the kids to participate in a small survey.  It was important for us to say to the children that this was not for a grade and that we just wanted to know how much each child could recall, stressing that it was “OK” if they didn’t remember the answers.  Patty wanted me to be aware that it could be difficult for kids to remember terms never presented to them before.  To her credit, the results showed something quite different.

The lecture was devised to provide the kids with a basic understanding of atoms so that we could then build that into a larger understanding of proteins.  Starting with the Periodic Table, we went from there to talk about how small atoms are, and why we need scientific models of proteins in order to see them.  We went through a lot of brand new information with the kids that day.  I had the help of a comic book to do so.  Going through my graphic novel archives, I came across a Classic Illustrated book discussing the history leading up to “The Atomic Age.” Narratives such as this are fantastic ways to communicate a lot of information while maintaining an audience’s attention. This comic book allowed me to build from the periodic table to the idea that proteins are simply atoms organized into larger structures.

“I agree that there is great value associated with the incorporating models into learning experiences.” Patty Nock

After this, I shared with the kid’s examples of protein data by referring to the proteins as “specimens,” like a zookeeper might describe a small creature.  We wanted to explain some basic information to the kids: That proteins come in all sorts of shapes and sizes, and they do specific things.  We labeled specific structures in the proteins and related those structures to protein function.  We did so by relating proteins to the kids like they were “characters” themselves from a larger story.  Ferritin was described as a “Recycling Bin” where the cell stores important atoms like Iron.  Antibodies are the “watchdogs of the cell” and alert the defense system to invaders. Ribosomes are bakers, reading a recipe and baking protein cakes.  Whenever possible, 3D animations were used to tell those narratives.

Oxygenation of Hemoglobin from Biologic Discovery on Vimeo.

At this point in the lecture, after describing each of the proteins you see above, we either stopped and broke the first two of four classes into Groups A and B, or we continued on with the lecture without breaking the children up into two groups (Group C) and presented both computer-aided visualization of proteins and physical model.

This was a small study, with only about 120 kids, and can be difficult to isolate concrete results about any one specific modality of visualization.  Two of the five questions asked had to do with Hemoglobin, while the rest sampled from other information in the lecture.  One of the Hemoglobin questions resulted in higher scores from both Group B classes (the kids that got to hold the model), while the other question showed mixed results between Group A and B.  What we did see as significant is that both classes of Group C (the 2 classes that had access to both 3D software viewer and physical protein model) did better on both questions than Group A and B.  This result, in fact, matches the results from a study conducted at Carleton College which concluded that the most effective manner at educating college students about x-ray crystallography data is through the combined application of computer-aided visualization and physical model. (Kelly 2001)

After we finished evaluating the results, a Hemoglobin model was donated to PS321 making certain all children will get the chance to learn from the model.  The children we saw a second time remembered the lecture and many could recall Hemoglobin by name.  Some could even name sub-structures five weeks after having first seen it.

Our takeaway from this informal evaluation is as follows:

For those interested, here’s a link to the Google Presentation I gave to the kids:  LINK I must give credit to a few artists whose work you’ll see in this lecture.  First, Drew Berry.  The amazing video of Protein Synthesis was hands down the kids’ favorite animation and a true accomplishment in the world of molecular animation.  Also, David Goodsell’s illustrations from his “Molecule of the Month” series.  I consider the protein illustrations created for this presentation to be “after” his aesthetic approach and done so specifically to ensure a common visual approach when presenting protein illustrations.  Jean Claude Michel Jr., a good friend, and fellow Medical Illustrator also helped out with a fun cartoon character.  The kids responded with enthusiasm to the cartoon respiratory and circulatory system revealed during the lecture.  And finally, I believe Gay Welker is to be attributed for the amazing historical comic book frames taken from Classics Illustrated, June 1960 Number 156A.

Biologic Models has a variety of Hemoglobin based models. In specific, we have two types of Glycated Hemoglobin A1c and Oxygenated Hemoglobin, each in different materials and sizes. Please see the description below to learn more about each product and functionality.

This is a 3D print of Glycated Hemoglobin (HbA1c), created from PDB ID: 3B75. The globulin chains (2x A,B) of this model are colored white, HEME groups red, and Oxygen Molecules Blue. This model also visualizes the HbA1c diabetes blood test by showing how sugar molecules (cyan) attach to proteins changing their shape and decrease its functionality. Based on simulations of potential glycation sites, we have isolated the Lys binding residues (medium Grey) and attached sugar molecules. When compared to our normal Oxygenated Hemoglobin (Hb), you can quickly explain both what the HbA1c blood test examines, as well as why it is so important for patients to control their blood glucose.

We love hearing from people, send us an email if you have any quesitons or requests.