The recent rapid spread of Zika virus and its autoimmune-neurological linkage to birth defects has generated worldwide concern. Use this is a 3D print of the Zika Virus Shell to explain targets for intervention of this dangerous virus. 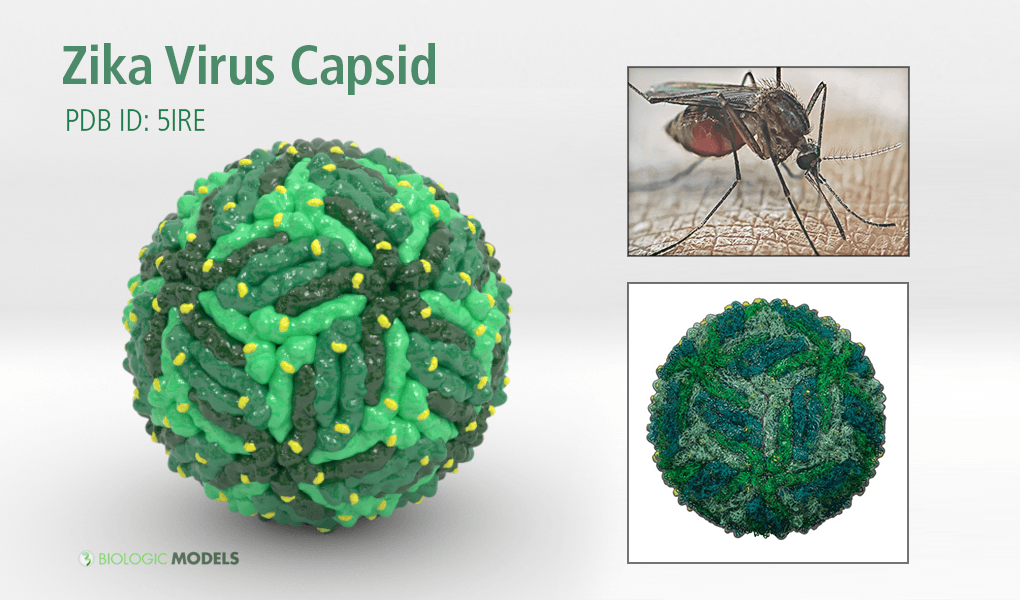 The recent rapid spread of Zika virus and its unexpected linkage to birth defects and an autoimmune-neurological syndrome has generated worldwide concern. The Zika virus is a flavivirus like dengue, yellow fever and West Nile viruses and transmitted through mosquitoes.

“The structure of Zika virus is similar to other known flavivirus structures except for the ~10 amino acids that surround the Asn154 glycosylation site found in each of the 180 envelope glycoproteins that make up the icosahedral shell. The carbohydrate moiety associated with this residue, recognizable in the cryo-EM electron density, may function as an attachment site of the virus to host cells. This region varies not only among Zika virus strains but also in other flaviviruses and suggests that changes in this region influence virus transmission and disease”  — NCBI Citation

Zika is a member of the virus family Flaviviridae and the genus Flavivirus. It is spread by daytime-active Aedes mosquitoes, such as A. aegypti and A. albopictus. Its name comes from the Zika Forest of Uganda, where the virus was first isolated in 1947. Zika virus is related to dengue, yellow fever, Japanese encephalitis, and West Nile viruses.

The infection, known as Zika fever, often causes no or only mild symptoms, similar to a mild form of dengue fever. It is treated by rest. Since the 1950s, it has been known to occur within a narrow equatorial belt from Africa to Asia. As of 2016, the illness cannot be prevented by medications or vaccines. Zika may spread from a pregnant woman to the baby. This may result in microcephaly and other severe brain problems. Zika infections in adults can result in Guillain-Barré syndrome.

In January 2016, the United States Centers for Disease Control and Prevention (CDC) issued travel guidance on affected countries, including the use of enhanced precautions, and guidelines for pregnant women including considering postponing travel.

This is a 3D print of the Zika Virus with a digital QRC code base. Green colored proteins chains and yellow active sites demonstrate the complexity and beauty of this dangerous virus. Prints available in multiple sizes (small, medium, and large) through our shapeways.com store. Purchase through the Biologic Models shop and take an extra 10% the medium size molecular model kit.

Purchase original 3D prints of the Zika Virus with a custom base! Each base includes a QR code to online information about the model.