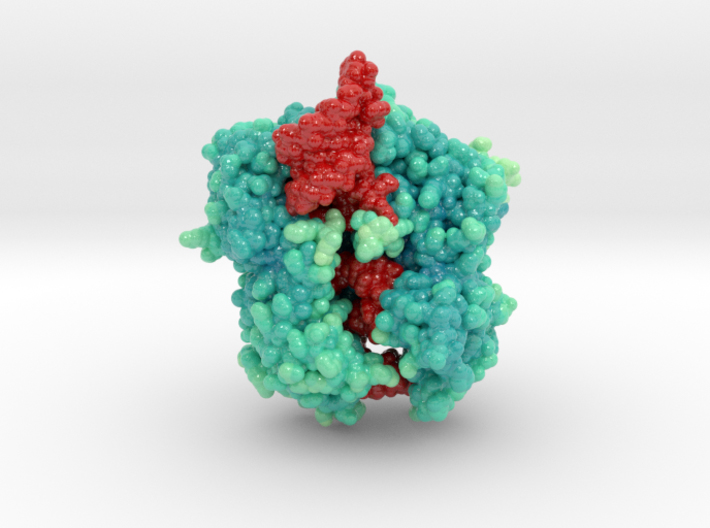 CRISPR Cas13a is a newly discovered member of the Genome editing system making waves in the biotech community. Explore this 3D printed protein model of CRISPR Cas13a to examine how it uses RNA to target and edit viral RNA. Protein model created from PDB ID: 6IV9

For millions of years, bacteria and viruses have been locked in an evolutionary arms race. Viruses evolving new mechanisms to evade CRISPR, and CRISPR evolving to find different ways of preventing re-infection. CRISPR is a  family of genome-editing proteins that evolved in bacteria and archaea to combat viral infections. CRISPR captures portions of infected viral DNA or RNA and cuts out viral infections from the cells.  CRISPR Cas13d is one such permutation. While other CRISPRs like Cas9 scan genes for viral DNA, Cas13d looks for viral RNA in the cytoplasm of cells.

To understand the molecular basis for Cas13d function and explain its compact molecular architecture, Cas13d combined with hydrogen-deuterium exchange revealed conformational dynamics that have implications for RNA scanning.

To understand the protein dynamics of CRISPR Cas13d described above, I have chosen a primary color scheme to showcase Cas13d’s atomic temperature by tinting cyan from dark to light according to it’s cooler and hotter regions. Like our other CRISPR models, Guide RNA is dark red and Target RNA is dark magenta.