Modern neuroscience reveals how psilocybin interacts with serotonin receptors in the brain in order to produce a range of consciousness-altering effects. 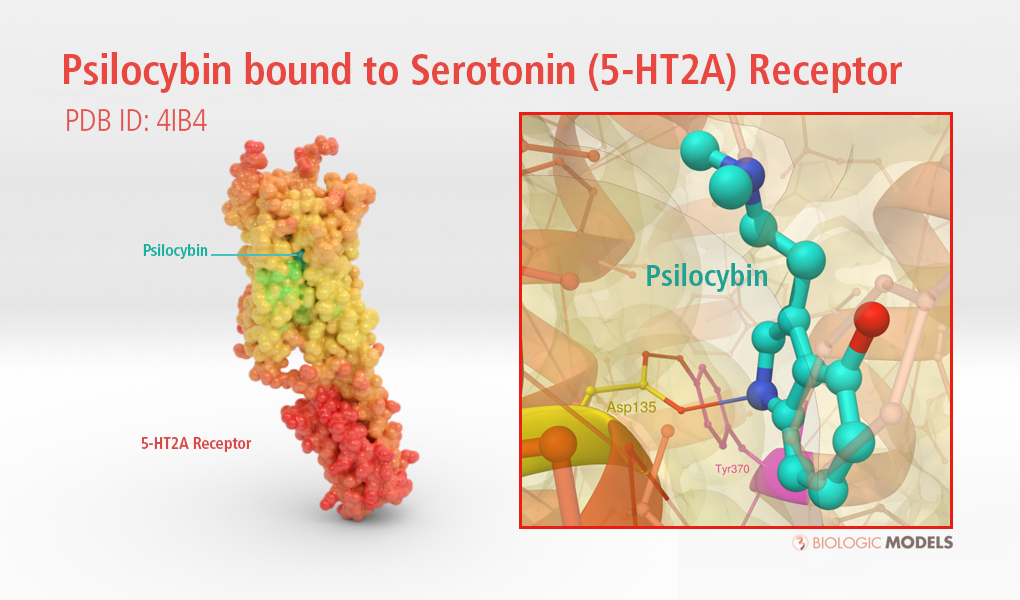 The serotonergic system is among the oldest neurotransmitter systems in the brain. It might be as old as 750 million years; even single-celled organisms carry serotonin receptors. In humans, those serotonergic neurons originate from the raphe nuclei in the brain-stem and form a network spanning every corner of the brain.

Psilocybin is a naturally occurring psychedelic compound produced by more than 200 species of mushrooms, collectively known as psilocybin mushrooms. The most potent are members of the genus Psilocybe, such as P. azurescens, P. semilanceata, and P. cyanescens, but psilocybin has also been isolated from about a dozen other genera. As a prodrug, psilocybin is quickly converted by the body to psilocin, which has mind-altering effects similar, in some aspects, to those of LSD, mescaline, and DMT. In general, the effects include euphoria, visual and mental hallucinations, changes in perception, a distorted sense of time, and spiritual experiences, and can include possible adverse reactions such as nausea and panic attacks.

In 1959, the Swiss chemist Albert Hofmann isolated the active principle psilocybin from the mushroom Psilocybe mexicana. Hofmann’s employer Sandoz marketed and sold pure psilocybin to physicians and clinicians worldwide for use in psychedelic psychotherapy. Although the increasingly restrictive drug laws of the late 1960s curbed scientific research into the effects of psilocybin and other hallucinogens, its popularity as an entheogen (spirituality-enhancing agent) grew in the next decade, owing largely to the increased availability of information on how to cultivate psilocybin mushrooms. [4]

In 2016, the Beckley-Imperial Research Program released a study indicating the potential use of psilocybin to alleviate treatment-resistant depression. After 1 week of treatment, psilocybin had a staggering success rate of 67 percent and 42 percent remained in remission for up to three months. Further indication of the therapeutic efficacy of psilocybin found as an aid to smoking cessation. Brain-imaging techniques shed light on how psilocybin produces its therapeutic effects. Neural imagining reveals a more ‘entropic’ pattern of brain connectivity, with increased communication throughout the brain leading to more flexible modes of cognition following psilocybin treatment. [5]

Psilocybin has a high affinity for the 5-HT2A serotonin receptor, where it mimics the effects of serotonin (5-hydroxytryptamine, or 5-HT). Although the 5-HT2A receptor is responsible for most of the effects of Psilocybin, various lines of evidence have shown that interactions with non-5-HT2A receptors also contribute to the subjective and behavioral effects of the drug. For example, psilocin indirectly increases the concentration of the neurotransmitter dopamine in the basal ganglia, and some psychotomimetic symptoms of psilocin are reduced by haloperidol, a non-selective dopamine receptor antagonist. Taken together, these suggest that there may be an indirect dopaminergic contribution to psilocin’s psychotomimetic effects. In contrast to LSD, which binds to dopamine receptor D2, psilocybin and psilocin have no affinity for the dopamine D2 receptors.[1,2,3]

This 3D printed protein model of ​Psilocybin (blue unseen) bound to Serotonin Receptor (orange) is visualized as a volumetric surface and colored by the protein’s bFactor. Model created from PDB ID: 4IB4.

Request a custom 3D printed protein model. Send us the protein name and PDB ID of the protein you’re interested in printing and we’ll get back to you with a feasibility analysis and estimate for printing.