Recently, Cornell University commissioned us to create 3D printed models of PIP4K II Alpha and Beta for the purpose of demonstrating PIP4K dimerization. 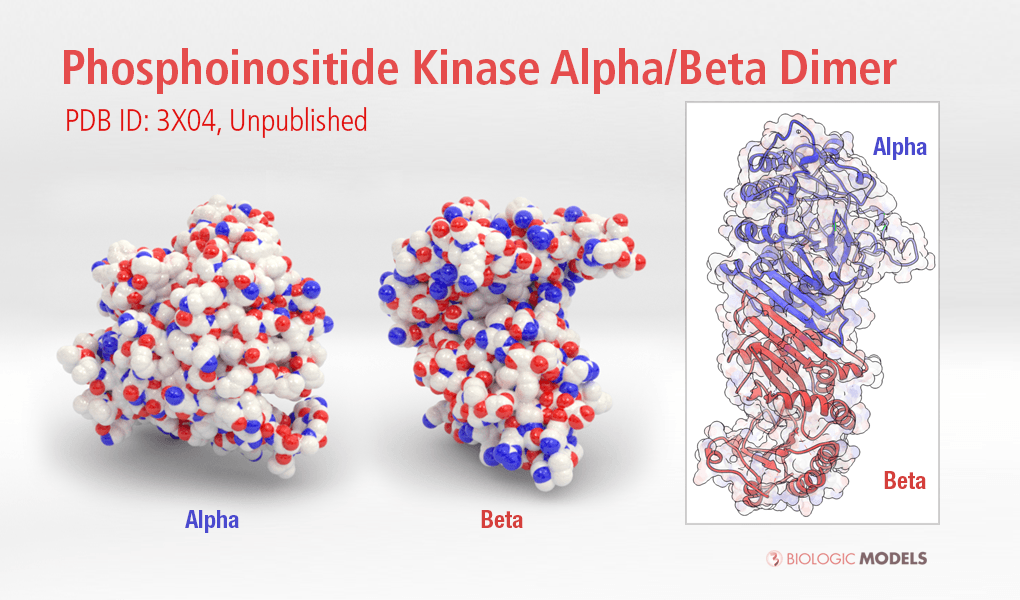 PIP4K2A and B are enzymes thought to be involved in the regulation of secretion, cell proliferation, differentiation, and motility. This family of proteins is a target of interest for the treatment of both cancer and diabetes.

PIP4K kinases are composed of a proline-rich N-terminal region, a central helical domain, and a kinase domain located C-terminally. The N-terminal region contains a physiologically important binding site for a Golgi adaptor protein ACBD3. The central helical domain is responsible for the interaction with a small guanosine triphosphatase Rab11. Like most kinases, PIP4K can be divided into N-terminal and C-terminal lobes with the ATP binding groove and putative phosphatidylinositol binding pocket in a cleft between the lobes.

Phosphatidylinositol 4-kinase (PI4K) is an essential molecule in cellular signaling and trafficking. Specifically, trafficking proteins between the Golgi apparatus and the trans-Golgi network. This family of protein is an intracellular protein that traffics between the cytoplasm and nucleus.  In the cytoplasm, Pi4KKB can be recruited to the membranes of the Golgi apparatus by GTP binding proteins Arf1 and Rab11. PI4KB is phosphorylated by kinase D. This interaction with stabilizes PI4K in an active conformation and regulates the trafficking from the Golgi system to the plasma membrane. Its nuclear function remains is not yet fully understood, and the study of its structure remains of significance.

Phosphatidylinositol 4-kinase 2-alpha (PI4K2A) is the most abundant phosphatidylinositol 4-kinase in human cells and is responsible for approximately 50% of the total PI4P within the cell. PI4K2A is associated mainly with the membranes of the trans-Golgi network; its membrane association is achieved by a heavy palmitoylation within a specific cysteine-rich motif. Besides the synthesis of phosphatidylinositol 4,5-bisphosphate, PI4K2A is involved in various cellular processes including membrane trafficking, regulation of endosomal sorting promoting target protein recruitment to endosomes or trans-Golgi network, or signal transduction. Particularly, it regulates targeting of clathrin adaptor complexes to the Golgi apparatus, the Wnt signaling, and EGFR signaling pathway.

Phosphatidylinositol 4-kinase 2-beta (PI4K2B) is primarily cytosolic and contributes to overall PI4-kinase activity along with other protein family members. This protein is involved in early T cell activation and insulin signaling.

Phosphatidylinositol 4-kinases are evolutionarily conserved among eukaryotes. PIP4K family of proteins can be found in vivo as both monomers and dimers, and includes four human isoforms.

PIP4K II Alpha and Beta each dimerize with a second PIP4K Alpha or Beta. Since protein homology is relatively conserved, these protein models can be used to visualize how PIP4K II Alpha and Beta might dimerize with each other. Visualizing the positions of nitrogen and oxygen atoms helps to identify conserved residues shared between the adjacent PIP4KII. By aligning these residues, we can orient each model correctly to demonstrate how PIP4KII dimerization.

Models available in mutltiple sizes and printed to order. Purchase two of each and demonstrate protein dimerization. Please allow for two weeks for printing and shipping.