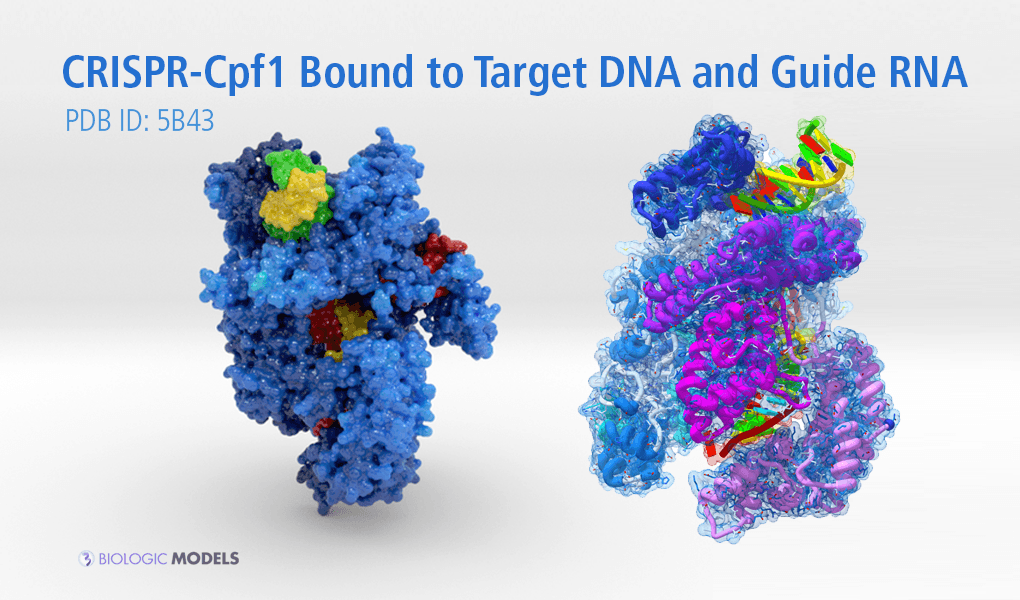 Clustered Regularly Interspaced Short Palindromic Repeats (CRISPR) from Prevotella and Francisella CRISPR/Cpf1 is a DNA-editing technology analogous to the CRISPR Cas9 system, characterized in 2015 by Feng Zhang’s group from the Broad Institute and MIT. Cpf1 is an RNA-guided endonuclease of a class II CRISPR/Cas system. This acquired immune mechanism is found in Prevotella and Francisella bacteria. It prevents genetic damage from viruses. Cpf1 genes are associated with the CRISPR locus, coding for an endonuclease that use a guide RNA to find and cleave viral DNA. Cpf1 is a smaller and simpler endonuclease than Cas9, overcoming some of the CRISPR/Cas9 system limitations. CRISPR/Cpf1 could have multiple applications, including treatment of genetic illnesses and degenerative conditions. https://en.wikipedia.org/wiki/CRISPR/Cpf1

This is a 3D print of CRISPR Cpf1 created in full-color sandstone along with its Augmented Reality (AR) Base. The model depicts CRISPR (blue) bound to its guide RNA (red) while editing its Target DNA (yellow and green). The subtle color variations in the CRISPR are associated with its bFactor, or atomic temperature. The darker the color, the less the protein moves with a cooler atomic temperature.

Select from multiple sizes and material finishes. Consider purchasing an Augmented Reality base for your CRISPR Cpf1 protein model.