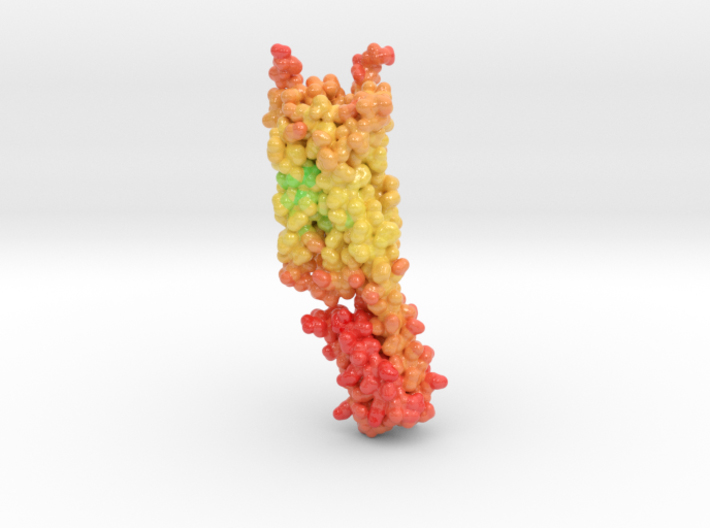 Psilocybin, the active ingredient in psychoactive mushrooms, has provided the spiritual and cultural bedrock of many great civilizations. The Aztecs referred to teonanácatl, which translates as ‘divine mushroom’, and modern neuroscience has revealed how psilocybin interacts with serotonin receptors in the brain in order to produce a range of consciousness-altering effects. Explore this 3D printed biologic model of Psilocybin bound to Serotonin Receptor.

Drugs active at G protein-coupled receptors (GPCRs) can differentially modulate either canonical or noncanonical signaling pathways via a phenomenon known as functional selectivity or biased signaling. We report biochemical studies showing that the hallucinogen lysergic acid diethylamide, its precursor ergotamine (ERG), and related ergolines display strong functional selectivity for β-arrestin signaling at the 5-HT2B 5-hydroxytryptamine (5-HT) receptor, whereas they are relatively unbiased at the 5-HT1B receptor. To investigate the structural basis for biased signaling, we determined the crystal structure of the human 5-HT2B receptor bound to ERG and compared it with the 5-HT1B/ERG structure. Given the relatively poor understanding of GPCR structure and function to date, insight into different GPCR signaling pathways is important to better understand both adverse and favorable therapeutic activities.

This 3D printed protein model of ​Psilocybin (blue unseen) bound to Serotonin Receptor (orange) is visualized as a volumetric surface and colored by the protein’s bFactor. Model created from PDB ID: 4ib4 .