Insulin is a small 51 residue hormone synthesized and secreted by ß cells in the pancreas. Insulin is central to lowering blood glucose and maintaining metabolic function. Following meals, the pancreas sends out insulin into the blood stream to signal the body that glucose is ready for uptake by glucose transporters after binding to the insulin receptor. 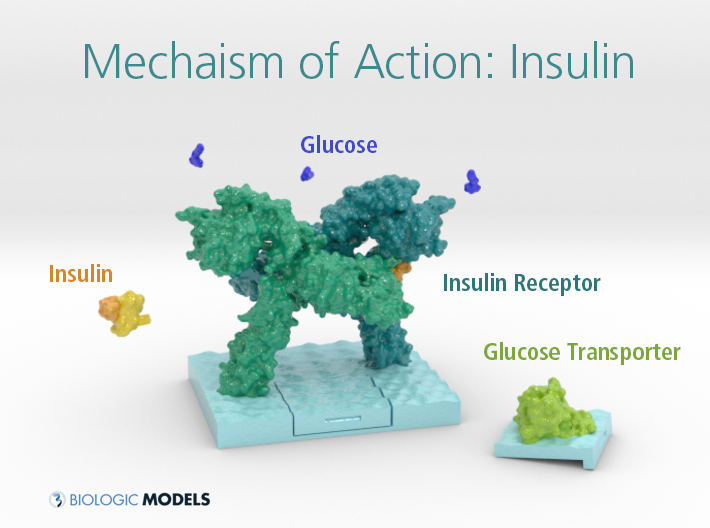 Insulin initiates its action by binding to a glycoprotein receptor on the surface of the cell. This receptor consists of an alpha-subunit, which binds the hormone, and a beta-subunit, which is an insulin-stimulated, tyrosine-specific protein kinase. Activation of this kinase is believed to generate a signal that eventually results in insulin’s action on glucose, lipid, and protein metabolism. The growth-promoting effects of insulin appear to occur through activation of receptors for the family of related insulin-like growth factors. Both genetic and acquired abnormalities in the number of insulin receptors, the activity of the receptor kinase, and the various post-receptor steps in insulin action occur in disease states leading to tissue resistance to insulin action.

Following meals, the body requires insulin to lower blood glucose.  Insulin binds to the Insulin Receptor on the surface of hepatocytes, muscle, and fat. The Insulin Receptor propagates intracellular signalling for glucose transporter 4 (GLUT4) to come up to the surface of the cell. GLUT4 is a mono-directional transport proteins that shuttles glucose into the cell, lowering blood sugar. Following pancreatic failure, people develop Diabetes Mellitus and require insulin supplementation to prevent organ failure and death.

Waiting inside cells are insulin stimulated glucose 4 transporters. The Insulin signal for GLUT4 begins when it binds to the insulin receptor on the surface of cells throughout the body. Insulin Receptors are membrane glycoproteins composed of two separate extracellular ectodomains and two intracellular tyrosine kinases. Binding of insulin to its receptor triggers conformational changes to its kinase that allows adenosine triphosphate (ATP) to begin cascade of protein activation and inactivation. The phosphorylated tyrosine kinase next phosphorylates other intracellular proteins leading to insulin receptor substrate (IRS) 1 and 2 activation. The insulin signal is further propagated through the PI-3 kinase phosphorylation network and finally GTPase RAC1. RAC1 stimulates the membrane’s cytoskeleton structure to reorganize and glucose transporters.

Stored inside the cell transport vesicles, plasma membrane spheres with GLUT4 ready to be fused with the extracellular membrane. GLUT4 is the insulin stimulated glucose transporter. At the completion of the insulin stimulated chemical cascade, GLUT4 vesicles quickly merge into the plasma membrane and begin lowering blood glucose levels by actively transporting glucose into cells.

Through activation of these signaling pathways, insulin acts as a powerful regulator of metabolic function. In patients that develop pancreatic dysfunction, insulin insufficiency developes into the chronic disease Diabetes Mellitus. Insulin insufficiency must be addressed in order to prevent systemic organ failure and eventual death. Pharmaceutical insulin supplementation is required to treat both Type 1 and 2 Diabetes Mellitus. Regulation and usage can be difficult for many patients. Insulin receptor inactivation occurs when the cycle of insulin receptor dimerization does not stop, resulting in continued GLUT4 translation until the cell can no longer sustain glycemic demand with more GLUT4 transporters. The resulting condition is known as insulin resistance.