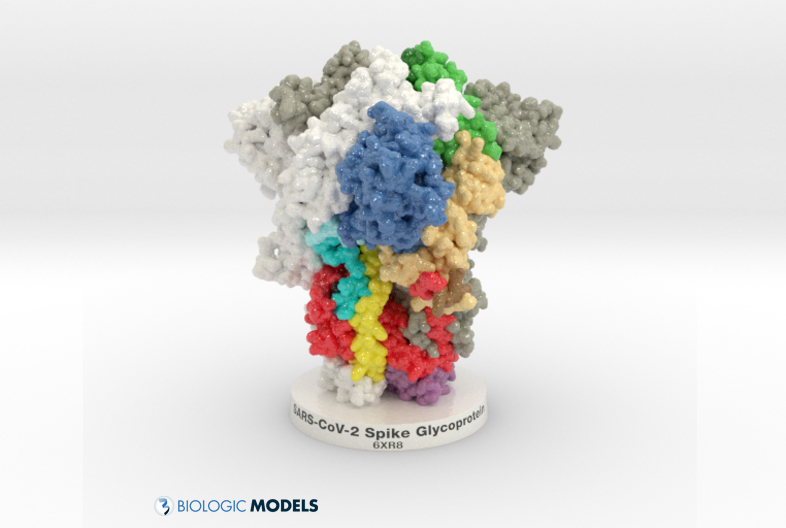 The outbreak of a novel coronavirus (SARS-CoV-2) represents a pandemic threat that has been declared a public health emergency of international concern. The SARS-CoV-2 Spike Glycoprotein is a key target for vaccines, therapeutic antibodies, and diagnostics. Biologic Models designed this 3D printed protein model of the SARS-CoV-2 Spike Glycoprotein Prefusion 6XR8 to help scientists better visualize these targets.

The membrane-bound configuration of SARS-CoV-2 Spike Glycoprotein (PDB ID: 6XR8  seen below) is a trimer complex. Each monomer of the trimer is broken into two primary domains (S1 and S2) and then further characterized by a series of functional domains that facilitate either host identification and membrane fusion.

To better understand the structural relationship of domain within the Spike Glycoprotein, a protein dataset 6XR8 has been colorized to match our 3d printed model. Explore each domain below after “Initializing” the dataset.

Text and Illustrations from SCIENCE publication: “Cryo-EM structure of the 2019-nCoV spike in the prefusion conformation.”

At the beginning of each S1 domain of the Spike Glycoprotein is the N-terminal Domain (Blue). It is associated with the stabilization of adjacent monomers of the Spike Glycoprotein. Following it is the Receptor-Binding Domain (RBD green) that binds angiotensin-converting enzyme 2 (ACE2) with a higher affinity than it does severe acute respiratory syndrome SARS-Coronavirus ‘Classic’ (2002). This in part is due to the unique RBD Binding Motif (dark green) that matches the binding motif of a similar Coronavirus found in Pangolins. Several published SARS-CoV-1 RBD-specific monoclonal antibodies were tested and found that they do not have appreciable binding to SARS-CoV-2, suggesting that antibody cross-reactivity may be limited, in part due to changes to these residues (Dark Green).

Spike protein S2 (residue 686-1273) mediates fusion of the virion and cellular membranes by acting as a class I viral fusion protein. During viral and target cell membrane fusion, the coiled-coil regions (light yellow and orange) assume a trimer-of-hairpins structure, positioning the Fusion Peptide (cyan) in close proximity to the C-terminal region of the ectodomain. The formation of this structure appears to drive the apposition and subsequent fusion of viral and target cell membranes.

Biologic Model of SARS-CoV-2 Spike Glycoprotein Prefusion 6XR8 3D printed in Full-color Sandstone or Plastic and colored to match “Cryo-EM structure of the 2019-nCoV spike in the prefusion conformation” published recently in SCIENCE.

Learn more about the SARS-CoV-2 Spike Glycoprotein and explore different datasets that capture its interactions with different proteins and molecules: Learn More